The ProForm Pro E14 is the Most Advanced Elliptical Yet!

The Pro E14 is the newest elliptical in the ProForm lineup, joining the base Pro 9.9 to make up the company's advanced series. It has features never before seen on a ProForm elliptical, including a huge 14" Smart HD touch screen display.

It also has more capability than previous models, making it a great replacement for recently retired Pro 12.9 and Pro 16.9, both very popular  cardio machines.

Let's jump into our review to see what the E14 is all about...

The ProForm Pro E14 is all black with silver and red accents, and has a much more modern, streamlined look to it. 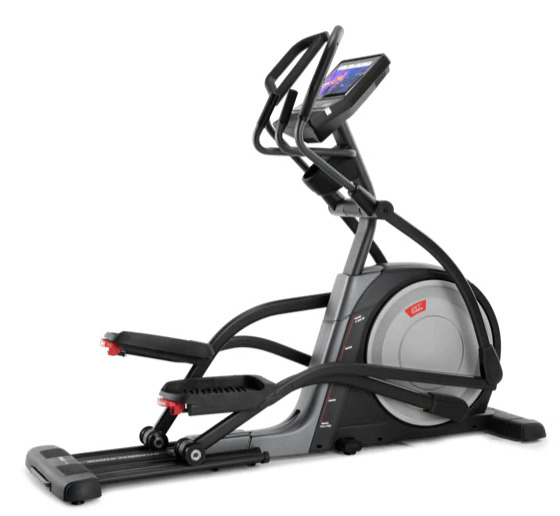 UPDATE: It looks like the Pro E14 has been discontinued. Check our reviews of the the latest ProForm ellipticals here to read about the newest models.

It was surprising to see the Pro 12.9 and Pro 16.9 ellipticals be discontinued, as both were very popular models that sold very well for the company.

The new ProForm Pro E14 essentially replaces both of those, leaving only the base Pro 9.9 elliptical as the other choice in the Pro Series.

As of this review the Pro E14 came with one year free of the company's iFit program, which gives you an opportunity to try it out to see if you like it.

For the uninitiated, iFit is an interactive program found on ProForm and NordicTrack ellipticals and other cardio equipment, with on-demand and live workouts, Google maps, tracking and sharing, and lots of other great features to keep you motivated to work out.

After the initial free trial, it costs roughly $39 per month, and is well worth it in our opinion.

On top of the iFit workouts, the ProForm Pro E14 has a huge 14" Smart HD touch screen, as we mentioned above, which is the biggest they've offered to date. (The previous Pro 16.9 had a 10" touch screen)

You can view all of your stats, iFit maps and everything else on the touch screen, just like you would at the gym.

You get a 20" adjustable stride, 26 resistance levels to change your workout intensity, and 20 degrees of incline to ramp up your training.

The Pro E14 is more durable than any of their other treadmills, and can accommodate up to 350 lb. maximum user weight. It also has a very heavy 32 lb. flywheel for smoother performance.

So far the Pro E14 seems to be a welcome addition, although it is also their most expensive machine at just under $2,000. But when you add up all of the features and compare it to their competitors, it's worth it.

How Does the Pro E14 Compare to the Other ProForm Elliptical Trainers? 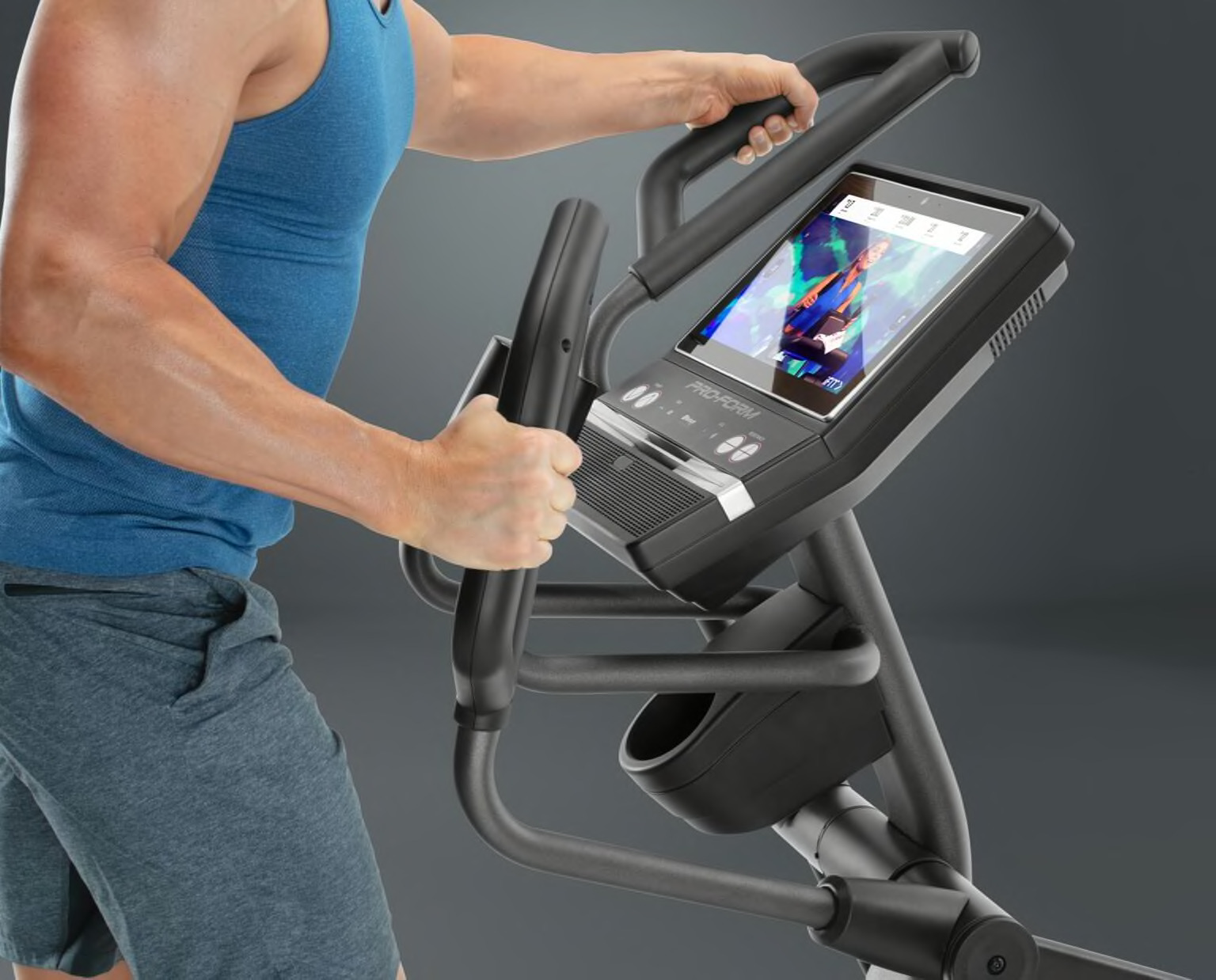 As we mentioned, the ProForm Pro E14 is the most advanced elliptical that the company offers...the top of the line model in the Pro Series. So if you're looking for the best model they offer, currently the E14 is it.

Let's take a look at the rest of the ProForm ellipticals to see how they compare....

The lineup starts with the Hybrid Trainers, which are ellipticals and recumbent bikes combined into one machine. These are very basic trainers for light usage, but a good choice for those on a budget who just want to sweat a little bit.

Moving up in the lineup you have the Carbon Series, consisting of the Carbon EL, Carbon EX and Carbon E7. These are traditional ellipticals, with 19" strides, 18-24 resistance levels, 20 degrees of incline, 15-25 lb. flywheels and up to 325 lb. max user weight.

A step up from the Carbon ellipticals are the Pro Series ellipticals, which consist of the base Pro 9.9 and the newer Pro E14.

The Pro E14, as you read about above, improves upon the Pro 9.9 with a 14" Smart HD touch screen, 26 resistance levels and 32 lb. flywheel. Otherwise the two machines are very similar.

ProForm also offers a relatively new HIIT Trainer Series, which is also a hybrid machine that combines an elliptical with a stepper. These are compact machines with 10" vertical strides, 30 lb. flywheels and touch screen displays like the Pro E14 has.

Decide if you want a traditional elliptical or a hybrid, then find the model that most appeals to you within the series.

The Pro E14 is a great addition to the ProForm elliptical lineup, and it's a great option for those who want something a bit more advanced for their home gym.

You get one of the largest touch screens available, tons of on-demand and live workouts through the iFit program, incline capability, plenty of resistance levels, generous stride length and plenty of other features and capabilities.

At just under $2,000 it may be a bit pricey for you, so you might want to look at the Pro 9.9 as well to save a few hundred. You don't get the touch screen display but the workout itself is similar.

If you're more of a casual user also consider the new Carbon Series, which will also give you a great workout. These ellipticals are not as durable as the Pro models, but perfectly capable for home use.