The ProForm ZE 6 elliptical is one of ProForm’s lower priced elliptical which makes it cost effective for the wider market. With an incline range it gives it a big bonus compared to some of the competitors at this price.

One of the best features of the ProForm ZE 6 elliptical is the 3 – 20 degrees changeable incline which allows users to be able to easily target different muscle groups of the lower legs such as the quads, glutes and hamstrings. There is also the ability to adjust the stride length to 20” to suit the needs of a variety of users.

There are 18 workout applications which are boasted to have been designed by personal trainers The 18 digital resistance settings enable you to increase or decrease the intensity of the sessions with a simple plus and minus button. 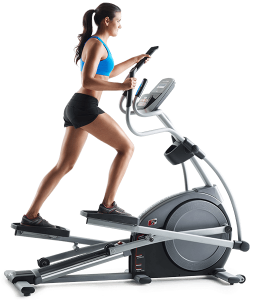 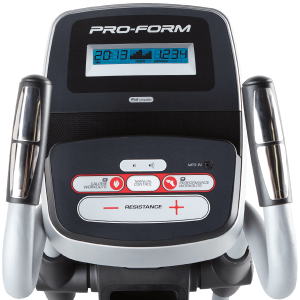 UPDATE: As of 2016, the ZE 6 elliptical is no longer available.  You can check out all of the latest ProForm elliptical reviews here.

Many users have praised the ProForm ZE 6 elliptical for its easy assembly and its simple functionality. Many of the competitive priced models tend to be overly complicated with technology but this low priced unit gives the user a simplistic but not cheap feel.

However there does appear to be some evidence that the elliptical is fairly loud with the potential of squeaking and creaking upon use which probably is mainly linked to the low price tag as you cannot expect top quality mechanisms when paying under $1000 for an elliptical trainer.

Another common negative that appears in reviews is the cheap plastic covering that the elliptical has; many claimed it has broken quite quickly or even arrived broken. But again when spending such a small price on an elliptical you have to expect there to be some negatives.

Despite many bad reviews the ProForm ZE 6 elliptical in our opinion isn’t really that bad. Yes it may not have the best materials and be slightly cheaply made but all in all it has a great range of features especially the incline ability which many higher priced elliptical’s simply don’t have.

If you are looking for a machine in your home that won’t break the bank and you want to use once or twice a week this really is a great option.