The Proform 850 elliptical with GameFit is a bit of a gimmick machine made by ICON Fitness that some people might buy for the two games, but others may find they get tired of that feature fairly quickly. If you aren’t into playing video games and exercising at the same time, you will find you still get a good workout on this budget unit.

You can play two games, Fat Blocker™ and Calorie Destroyer™, on the attractive ClearView™ backlit display. They aren’t complicated and they are used as motivational tools; the longer and harder you workout the easier the games are to win. You can also increase resistance to a higher intensity with a single touch of a button.

The full list of specs on the Proform 850 elliptical with GameFit includes: 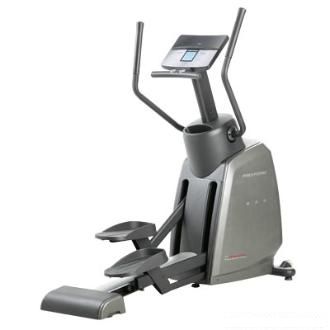 UPDATE:  The 850 GameFit elliptical is no longer being sold.  You can check out all of the current model reviews here.

Experts point out that the Proform 850 elliptical gets most of its positive points from the GameFit entertainment on the console. After that, once the machine is judged on the parts, warranty and overall reliability, it scores only average.

As a front drive elliptical, it will feel sturdier than a budget rear-wheel model, and the Stabilitrack and 18" Stride Length are very comfortable ergonomically. Overall, this isn’t a bad model but doesn’t win over pro trainers when comparing it with competitor machines.

Consumers writing their own elliptical reviews found the Proform 850 GameFit to be comfortable and able to support an average-sized rider for light to moderate workouts without fail.

Users tend to focus on just a few things when reviewing elliptical trainers; ease of assembly, sturdiness, and features such as the 12 programs and the music port. They’ve reported only a few complaints in these areas.

They also remarked that they had low expectations, but ended up liking the unit more than they thought they would.

While it isn’t our top choice in this price range, the Proform 850 elliptical with GameFit is good basic budget choice for moderate users who tend to baby their equipment. It sells for the incredible price of $499 (MSRP $999), plus ICON Fitness offers free shipping.

If the video component and iPod® port don’t interest you, and you want to find a better deal, we recommend you take a look at the Schwinn 430 elliptical which offers better value, components, and warranty -- it’s just a lot more machine for your money.