Building on the popularity of their Max Trainer, Bowflex elliptical trainers were first introduced in May of 2017 as the company returned to traditional cardio machines with their new Results Series.  It also included two treadmills, complementing the popular TreadClimbers that have been huge sellers for the company.

A Look at the Current Lineup

Currently there are only two ellipticals to choose from: the BXE116 and the BXE216. 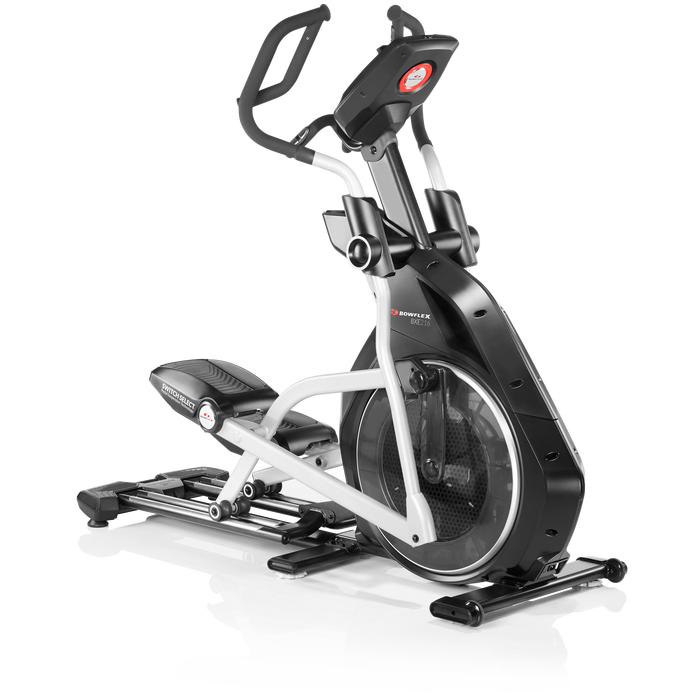 What's the Word on the Street?

UPDATE: It looks like Bowflex may have discontinued the ellipticals, possibly due to lack of interest. The BXE116 and BXE216 are no longer on the company website and not available anywhere else.

Check out the popular Max Trainer lineup instead.

There was a lot of buzz leading up to the release of the new Bowflex ellipticals, and so far the reviews have been positive from users and personal trainers.

The ellipticals have some very interesting features, some of which you won't find on similarly priced machines.  For starters, you have heavy flywheels which make for a quieter, smoother range of motion.

You also get a very generous 22" stride on both the BXE116 and BXE216, as opposed to a 19 or 20" stride on some other machines.  This is better, especially for taller users with a more extended range of motion.

We also like the fact that you get both grip and wireless heart rate monitoring (more accurate readings) and the chest strap is actually included for free which is quite rare.

The Bowflex ellipticals are also priced very well when they are on sale.

The new BXE116 elliptical is about $1499 when it's on sale, which is a good price for the features that you are getting.

The up-level BXE216 elliptical is $1799. That's probably your better option as you get more workouts, larger display and more advanced features.

The only downside we're seeing so far is the 25 year frame warranty.  We would have loved to see lifetime on the frame, to go with the solid 5 year parts/electronics and 2 year labor coverage, which is very good.

Which Bowflex Elliptical Should You Choose?

There isn't much difference between the prices of both Bowflex ellipticals so that's typically not the main determining factor when deciding between the two.

As you can see from the specs above, the BXE216 gives you a heavier flywheel, more workout programs, more hand positions, a larger display and a heavier max user weight capacity.

But how does the Bowflex elliptical compare to the competition?  That's a different story altogether.

Pricewise, the Bowflex BXE116 is about the same as the top model in the NordicTrack C Series, the C1650.  Although the BXE116 has a longer stride (22" vs 19") and heavier max weight capacity, the C1650 has it beat in pretty much every other category.

The NordicTrack elliptical has a heavier flywheel, more resistance levels, more incline capability, a ton more workouts and a much stronger warranty, not to mention a 10" touch screen display, iFit capability and other comforts that the BXE116, or even the up-level BXE216, don't have.

As far as the BXE216 is concerned, you can get one of the awesome NordicTrack FreeStride Trainers, the FS5, for about $100 less.  That one gives you up to a 32" stride, plenty of resistance levels and 32 built in workout programs.  There's also one of our top picks, the Sole E95, which also has the BXE216 beat in many areas.

What it comes down to is you end up paying a premium for the Bowflex name, which is probably a result of their popularity.  The Max Trainers and TreadClimbers are also more expensive than they should be, but I guess if they can get it....why not charge more?

The bottom line is the new Bowflex ellipticals are nice, and the 22" stride and free wireless chest strap are great, but there is a lot of solid competition out there in the price category.  We're not quite sure that they can compete with NordicTrack, Sole and the other big names in the $1000-$2000 price category.

Our Thoughts on the Bowflex Elliptical

So far we like the Bowflex ellipticals, but we don't love them.  There's a nice amount of workouts to choose from.  You can change things up with incline capability as well as all the resistance levels.

The console is bright and clear, and the Burn Rate console helps keep you motivated, especially if burning calories is one of your goals.  Isn't is always though?

Time will tell if they grow to be as popular as the Max Trainers or TreadClimbers...thats a very tough act to follow.

Hopefully in the future they can give us a lifetime frame warranty, but everything else is pretty good.

All Max Trainers are currently on sale up to $450 off!