Elliptical Backwards Pedaling: Does it Actually Do ... Anything?

If you think that pedaling your elliptical backwards is helping to train your gluts and hamstring muscles, think again.

While it may break up some monotony if you tend to spend hours on your trainer, it may not actually improve your workout.

It is believed that elliptical trainer manufacturers just happened upon the backward feature, and they used it to help sell the product. At least, that’s what we were told at the time.

In 1998, Graham Melstrand, sales rep for the Reebok CCS Body Trek elliptical trainers, indicated that going backwards on an elliptical was merely “a byproduct of the belt-drive mechanism design” and not a feature that was engineered from biomechanical studies.

Throughout the years, personal trainers were noticing that the backwards elliptical motion was having an effect on the muscle tone in the legs of their clients.

The trainers swear that it not only helps by creating a different pattern to stimulate the muscles, striding backwards works on your posture since the motion tends to cause you to tuck your butt and hips forward. 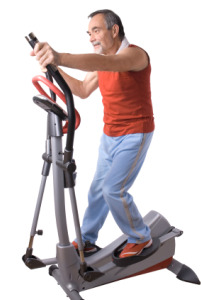 The research done on ellipticals in regards to muscle recruitment is extremely limited, however, a 2005 study done at Willamette University, offered some insight of the effects of pedaling an elliptical backwards or forwards.

The study examined the four major muscles groups in the legs and trunk (gluts, quads, hamstrings, and calves) using Electromyography (EMG) during an elliptical session comparing stride direction and using three incline settings (with the resistance and stride rate staying at a constant rate).

The researchers found that the biceps femoris (hamstring) was most active during forward striding, and the rectus femoris (the top muscle of the four quads) was most active during backward striding. The studies show the muscle activity for the gluteus maximus (gluts) increased with grade, and the gastrocnemius (the larger calf muscle) did not reveal any pronounced effect with either forward or backward direction. They concluded:

To wit: The rectus femoris is the only muscle significantly affected by going backwards on an elliptical.

Rather than be disappointed that backpedaling doesn’t do more, the results of the study are actually very encouraging to anyone interested in toning the lower body.

By doing the elliptical backwards, the rectus femoris – only the most beautiful and prominent muscle in the middle of the thigh! – is effectively targeted. This thigh muscle, which helps with hip flexion and knee extension, gives the legs a muscular and sculpted look when it is taut.

You’ll get even better results by adding some squats and leg presses to work the thighs hard, but if ellipticals are your passion, then get re-energized with forward and backwards motion – it’s not just for stride variety!

All About Elliptical Trainer Workouts