Epic is among several brands in the stable of the global equipment conglomerate, Icon Health & Fitness, which is the largest producer of fitness equipment in the world with over a billion dollars in sales. The other Icon brand names you will recognize include Proform, NordicTrack, HealthRider, FreeMotion, Image, Reebok, and Weslo. Icon is also the parent company for the iFit technology that lets you stream your workouts, Google maps, and more right to your console screen.

Epic Fitness makes elliptical trainers, treadmills and exercise bikes which are sold exclusively through Dick’s Sporting Goods stores in North America. A few years ago, the Epic line was a series of big and heavy budget machines that had been rebranded from the Reebok line and were sold exclusively at Costco.

The new and much higher priced Epics signify a complete break from the past.

UPDATE:  As of 2016 it looks like Epic is out of business.  They are no longer listed on the Icon Fitness site as they were previously, and their website, epicfit.com is currently not available.

Check out our Best Ellipticals in the $2000-$3000 range for a comparable machine.

A Look at the Machines 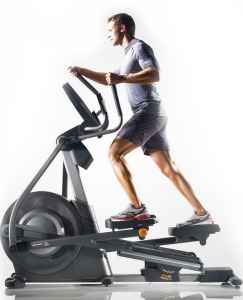 Epic elliptical trainers have made their move to distinguish their line from the Icon pack. Innovations such as EnergyReturn pedal comfort, Active Adjust console tilting, and SafeZone sensors are just a few of the new features included in every model.

The machines offer large flywheels and silent magnetic resistance, as well as variable stride lengths and expanded console features. They are backed by lifetime warranties on the brake and frame, plus 5 years on parts, and 2 years on labor.

The three current models include:

The Epic A32e elliptical ($2,499) has a 7" full color screen, plus 35 workout apps, and the same decline/incline ramp that lets you target all muscle groups more effectively for a better workout.

The Epic A30e elliptical ($1,999) is built on the same frame as the more expensive models but has a slightly smaller flywheel. It has a black and white feedback window, 30 programs, built-in heart rate sensors on the handlebars, and the same pedal comfort, safe sensors, and console adjustments as the A35e and the A32e.

What We Say About Epic Ellipticals

It is hard to tell if the new line of Epic elliptical trainers will find a niche in this highly competitive market. They are taking on some very big and established names in the higher end home market – brands such as Precor, Sole, Smooth, True, Octane and others.

While the Epics can boast of their innovations, upgraded flywheels, and perks such as wireless heart rate monitors and iPod plug-ins, they don’t have a track record to compare against the leading brands. Only time will tell if Epic will find their place with these machines.

Epic A30E Elliptical - The A30E features the same frame and features found on the A32E and A35E except with this model you get a black and white screen and fewer programs.

Epic A32E Elliptical - The A32E represents the best value among the new Epic trainers. You’ll save $500 over the top-end A35E which has a few more features but nothing you really need.

Epic A35E Elliptical - The very expensive Epic A35E is the top-of-the-line model from the company better known for the budget and mid-priced machines it once produced.