The Nautilus Commercial Series E916 elliptical is a gorgeous trainer with solid components – but don’t rush out to buy one just yet. The company announced in early 2010 that they are selling off their commercial equipment line.

The Nautilus Commercial Series E916 elliptical comes with an LCD display that shows time, interval time, watts, distance, pulse, speed, resistance, calories, and more. This $4,999 model is a fixed-stride machine; the Nautilus MyStride™ E916 ($5,949) allows the user to vary the stride length up to 30 inches. 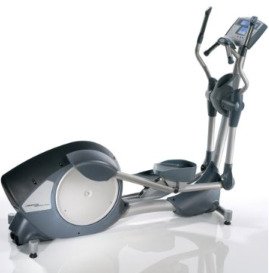 The features of the Nautilus E916 include:

UPDATE:  This E916 is no longer being sold.  You can check out alll of the new models on sale here:

Since the Nautilus Commercial Series E916 elliptical trainer is a health club model, it features the finest in workmanship and quality components including a Remote Operation Control™ (ROC™) system built into the moving handlebars so the user can adjust intensity level without moving their hands to the console. The Nautilus E916 also features a 400-pound weight capacity, articulating foot pedals, a four-bar linkage system in each pedal that follows the natural movement of the foot during the entire elliptical revolution, a commercial-grade poly-V belt drive which provides a nearly silent operation, and maintenance-free I-Glide™ bushings to reduce vibrations.

Nautilus, which lost $90 million last year and is in dire financial straights, is reorganizing. The company announced in a press release on 5 January 2010 that it is working to “divest its remaining commercial assets, including Nautilus-branded strength and cardio lines, and the manufacturing plant in Virginia.” In other words, Nautilus will restructure in order to focus on treadmills, bikes, and ellipticals for the consumer market and unload its commercial line.

Our Thoughts on the E916

While the Nautilus E916 is a dandy of an elliptical trainer in many ways, it has two big strikes against it: 1) the $4,999 price begs the question, why would a home user spend that much when there are solid commercial-quality home ellipticals for half that, and, 2) why buy the $5K Nautilus Commercial Series E916 elliptical when you can get a commercial model made by True, Precor, Life Fitness, or StarTrac for the same money? Even though spending over $3,000 for an elliptical is a crazy idea, we suggest you look at a Precor EFX, with a CrossRamp and a 10-year parts warranty, for under $3,400 and save a bundle.

Show me other Nautilus Elliptical Trainers