The BH Fitness X5 elliptical offers a long 20-inch stride length and a new concept for foot comfort, which the company dubs the Adjustable Width Technology (AWT) system. This feature allows the user to adjust the pedals closer together for a more natural gait.

The BH Fitness X5 elliptical has a blue backlit LCD matrix window which shows your progress during the workout, with readouts including speed, time, distance, calories burned, and pulse rate.

The rest of the features on the trainer include: 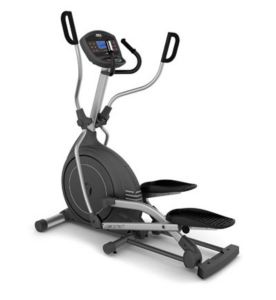 UPDATE:  Bladez Fitness is no longer making ellipticals with the BH label.  They have switched back to using the Bladez name on all of their equipment. 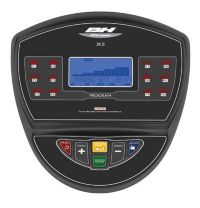 The BH stands for Beistegui Hermanos, which in Spanish means Beistegui Brothers. The company has been around for 100 years but only launched its foray into the North American elliptical market in 2007.

Prior to being part of BH Fitness, these models were the Bladez brand put out by DK Fitness, the leading equipment manufacturer from Taiwan. Trainers and fitness equipment experts are indifferent to the BH name, since it is way at the back of the pack in terms of being competitive against better known brands.

There aren’t many elliptical reviews on the BH Fitness X5 mainly due to the fact that it is not a big seller. It is an attractive unit and feels very stable to ride but users find the touted ergonomics to be lacking.

Like the lesser priced X4 elliptical, the X5 has a hard-to-read display because of the placement of the back-lighting on the LCD matrix screen. You have to lean into the console to read your workout progress and that’s a deal-breaker for all elliptical riders who constantly monitor the readout if they have nothing else to do (like watch TV).

And with no place to prop up a magazine, or even set down an mp3 player, you’ll spend long hours staring at a display that is frustrating to read the numbers.

The BH Fitness X5 elliptical has an MSRP listed at $1,799 and sells online for just under $1,000, about $50 more than its X4 sibling that is nearly identical in specs.

Despite the AWT system, this model is not ergonomically superior to any leading elliptical maker on the market. You will thank yourself to pass over the BH Fitness line and look at the industry leaders in this price range — NordicTrack, Sole, Smooth, and Horizon.

They sell a ton of machines and they have the market position to ride out the recession.

Those companies will likely be there to service your machine down the road if you need a part; while this Spanish-owned North American company will be on somewhat shaky ground if they don’t come up with a better ride and value than the BH Fitness X5 elliptical offers.