The Gazelle Power Plus – The “Higher End” of the Gazelle Line

The Fitness Quest Gazelle Power Plus is brought to you by that pony-tailed, beefy personal trainer Tony Little who runs the late night infomercials selling his DVDs, books, apparel, and other products.

If you’ve ever seen him working out on his own Tony Little exercise equipment, you probably wonder how someone with his weightlifter’s body type could possibly have gotten it by using cardio machines.

Your first question is likely that this mesomorph has the wrong body type for someone hyping cardiovascular exercise equipment. It looks like Tony Little spends his time overtraining by pumping iron and drinking protein shakes than doing cardio. But we’re here to talk about his Little machine so let’s get to it.

The Gazelle Power Plus includes a fitness computer that displays time, speed, distance, and calories burned. The $299.99 machine comes with resistance pistons to give you a better workout than the Gazelle Freestyle or Edge models. Other features of the Power Plus include: 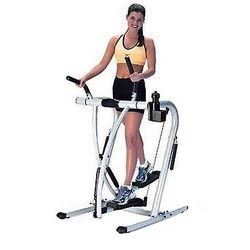 The pistons make it difficult for many users to move the pedals and this is considered the weight training aspect of the machine. Back down at the least resistance, the pedals swing freely enough for anyone to use the machine.

UPDATE: The Gazelle Power Plus has been discontinued and is no longer being sold.  You can find all of the newest models on sale here.

Fitness experts aren’t high on Tony Little’s exercise equipment and question the upper body workout as misleading since you are hanging on for balance for the most part, rather than working the muscles.

The Power Plus is the more expensive and “higher end” of the Gazelle line yet the hydraulic pistons have some breakage problems. These machines aren’t well built and don’t offer what ellipticals can do. Compared to true elliptical machines, these Tony Little models aren’t in the same league.

Consumers who have bought the Gazelle Power Plus have reported mixed reactions to the apparatus. A couple of overweight or less-than-fit reviewers liked it for its low impact cardio yet had consistent problems with nearly hyperextending joints, hurting their backs, even acquiring foot cramps. Ouch!

Other owners regret the purchase as they could not work up a sweat on Tony Little’s machine -- but they definitely did so trying to move the heavy, cumbersome piece of exercise equipment into storage!

For users interested in serious home cardio gyms, we can’t recommend exercise equipment by Tony Little for many reasons. First, for a 3' x 6' footprint the Power Plus Gazelle model is larger than most ellipticals we review.

Second, the footpads tend to give people problems. We know of a few cheap ellipticals that make the feet numb if they don’t have articulating footpads, and Tony Little’s Power Plus also ranks low for not providing a comfortable foot position.

Finally, we would caution any potential buyer that the Gazelle is not a true elliptical. The motion is completely different and momentum takes over the workout once you work up some speed.

That does tend to move the abdominals and love handles nicely, but you could spin an oldies record, dance The Twist and get the same results you’d get with the Gazelle Power Plus.